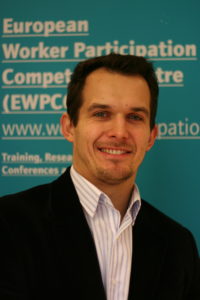 Romuald Jagodziński works as senior researcher at the European Trade Union Institute in Brussels which he joined in 2006. He has published extensively on various aspects of EWCs.His main research interests are various aspects of legislation and functioning of European Works Councils (implementation of EWC directives, enforcement, access to justice, development of EWCs, analysis of agreements, transnational company bargaining, confidentiality of information and consultation) and other transnational forms of workers’ representation. He co-manages the ETUI database of EWCs and is the chief editor of two expert websites www.ewcdb.eu and www.worker-participation.eu and is an infographics’ coordinator at the ETUI.

Jagodzinski R. (ed.) (2015) ‘Variations on a theme? The implementation of the EWC Recast Directive’, ETUI, Brussels