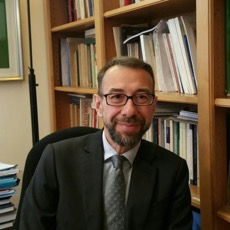 Stefano Bellomo (born Rome, 6th of April, 1967) is Full Professor in Labour Law  in the Law Department of Università di Perugia (Italia). Graduated in University of Rome Sapienza, he taught courses in the Faculties of Economic Sciences of the Universities of L’Aquila and Viterbo. He is the author of some 100 publications, monographs, academic and scholarly studies and articles. He speaks English and Spanish and attends regularly at national and international congresses and seminars. He has been Visiting Professor in the Law Faculties of Universities Rey Juan Carlos de Madrid and Universidade de Santiago de Compostela. He has also gave lectures in the Faculties of law of University of Osaka (Japan), Universidad de Vigo, Universidad de La Coruña, Universidad de Valencia, Universidad de Malaga, Universidad de Murcia (Spain), Universidad de Cordoba and of Universidad del Litoral de Santa Fé (Argentina). Elected as General Secretary of the Associazione Italiana di Diritto del Lavoro e della Sicurezza Sociale  – AIDLASS, for the period 2006-2012. Elected as Treasurer and member of the Board of the ISLSSL for period 2012-2015. Currently he is continuing to work together with ISLSSL as coordinator/promoter of initiatives in favour of Labour Law Young Scholars. He is regularly included in national and international research projects or groups.